Want to know how to use your book to grow your business, even if you hate selling? Get Our Guide

The 143rd in Iraq: Training the Iraqi Police, In Spite of It All 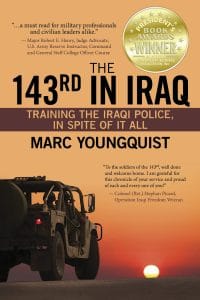 Book Description: Master Sergeant Marc Youngquist has served for over 40 years in the military and law enforcement. Over those years, he has met many unsung American heroes. These are men and women who have served our country with limited resources and support while being separated from friends and loved ones for months at a time, often while living in hostile environments. When they return home, these soldiers do their best to pick up where they left off, resuming their lives, never sharing the details of their heroic acts because “it’s all part of the job.” Even close friends and (especially) their families never hear about the danger they were in or the lives they impacted, despite the heroism of their acts.

In The 143rd in Iraq, Youngquist provides a firsthand account of a Connecticut National Guard Military Police Company’s attempt to recruit, train and prepare an Iraqi Police Force in 2003-2004 during the Iraq War, and the many dangers they faced as a result. From training for desert conditions in the dead of winter without the appropriate gear to driving through the night trying to find Baghdad with pieces of a map puzzle and finally to entering war zones without an adequate supply of soldiers, weapons or ammo, Youngquist shares how the 143rd Military Police Company did what they could, in spite of it all.

Whether you’re interested in military history, American heroes, the Middle East in general or the Iraq War history specifically, or you simply enjoy a riveting story of bravery and dedication, The 143rd in Iraq is sure to please.

As a former Commander of the 143rd MP Company (1997-1999), this bare knuckle blow-by-blow account of how my former soldiers performed so magnificently in Iraq made me proud, made me laugh, and even made me cry. It kept me on the edge of my seat, wanting to read the next page, and wishing I were there with them every step of the way. Knowing MSG (retired) Youngquist as I do, this detailed and, at times, disturbing, account of the obstacles the 143rd MP Company faced is the gritty truth as only a soldier’s NCO would tell it. To the soldiers of the 143rd: Well done and welcome home. I am grateful for this chronicle of your service, and proud of each and every one of you! – Colonel (Ret.) Stephan Picard Operation Iraqi Freedom Veteran

MSG Younquist has again provided invaluable service to our nation with this book. His ability to relate personnel, equipment and training to mission requirements makes “The 143rd in Iraq” a must read for military professionals and civilian leaders alike. MSG Younquist’s real life experiences accurately describe the challenges leaders face today. I wish I had had this book when I was teaching in ROTC. – Major Robert E. Henry Judge Advocate, United States Army Reserve Instructor, Command and General Staff College Officer Course

When America goes to war, she sends her serving sons and daughters into harm’s way for the protection of her people and the security of the nation. In doing so, she sends the strongest of the faithful, her volunteers, the people who have the hearts of lions, who leave their homes and family for the greater good of us all. And when America goes to war, she calls and asks, “Who will go?” Marc Youngquist, a former marine and serving National Guard trooper put up his hand and said, “I will”. Marc has written of his Connecticut Military Police National Guard unit as they deployed and saw action in Iraq in 2003 and 2004. His is a telling story that readers rarely see—the gritty clear-eyed truth that includes the chaos of organization, the apathy of command staff, the lack of critical need-to-have equipment, and the sometimes broken-down/obsolete vehicles, weapons, communications, adverse weather and health threats—even clothing necessary to do the job. Marc writes of this and more, not in complaint or anger, but as it is and what he and his fellow MP Unit still accomplished in an active and always dangerous combat zone. Every American owes a measure of gratitude and respect for our military. Every American should read Marc Youngquist’s account of our citizen soldiers and their missions—not only overcoming the challenge of a sometimes faceless enemy that uses buried and roadside car bombs, snipers, and guerilla warfare tactics to kill Americans, but how they prevailed and met the call of duty, “In Spite of It All.” – Bruce W. Tully Special Agent In Charge (Ret.) Senior Foreign Service Diplomatic Security Service United States Department of State

“The 143rd in Iraq is worthwhile reading for anyone interested in the experience of war.” A.A. Nofi Review Editor

Project Info: We first met Marc at a Connecticut Authors and Publishers Association event that Tara was speaking at. Little did we know that the conversation started there would lead to us eventually taking over the publication of this gripping narrative.

Marc’s original publisher decided to drop the title from their list sooner than he was ready for. When he asked if there was anything we could do to help, we gladly took over the publication for him.

While so many men and women sacrifice their time and safety to protect our country, there will always be tales of bravery to share. Keeping The 143rd in Iraq in print is just one small way to show our appreciation.

Connecticut veteran publishes memoir about heroism and bureaucracy in Iraq