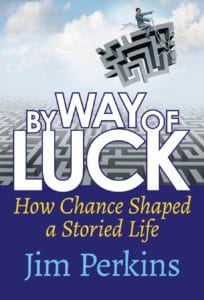 Publisher: A Work in Progress Company

Book Description: Follow along as Jim shares his stories of how the son of Greek Macedonian immigrants came to serve in the U.S. Air Force, rub elbows with celebrities and corporate bigwigs, significantly influence the publishing and ecommerce industries, and initiate a program that led to the conservation of more than 30 million acres of public lands in the United States. His stories give a first-hand glimpse into the evolution of business and media in America.

Learn through the wit and wisdom of the author how chance may even be shaping the story of your own life every time you decide to take the path “less traveled by.”

Project Info: While this title came to us as an already self-published book, the author wanted help with the marketing and distribution of it. His years of experience in the publishing industry enabled him to write and produce a highly engaging and entertaining book, and the project had appeal for us, despite the challenges of marketing a memoir from an unknown author.

We did ultimately resort to a cover redesign, which created a more appealing look to prospective readers. And we also led publicity efforts that resulted in author interviews and invitations to speak.

The author is a natural-born storyteller with the life experiences to make his stories more than just words. They are lessons to be learned from as well.