Gladys Stetson Leahy was born in 1897 in Poland, Maine, where she grew up with her mother in her grandparents’ home, a small produce farm. A bright girl with some promise beyond her current circumstances, she graduated from Edward Little High School in Damariscotta.

Presumably under the auspices of her aunt and uncle, Harriett and Luther Spiller, she attended and graduated from Bates College with a B.A. degree in 1919. (Aunt Harriett was the Regional Superintendent of Schools and Uncle Luther was the local postmaster.)

After marrying and being deserted by her third cousin, Abner H. Stetson, and bearing his son, she embarked on a teaching career. She started that career at the Edward Little High School. Over the next several years, she changed jobs and locations frequently, seeking to increase her wages in order to support her son, John Howard, who lived with Gladys’ blind mother. To further advance her position, she spent several summers gaining her M.A. degree from Boston University, which she achieved in 1928.

Her career travels eventually brought her to Danbury, Connecticut, where she began teaching at Danbury High School. She was introduced to John W. Leahy by a mutual friend in the mid-1930s. Eventually marrying him, she joined in helping her new husband with his various business ventures and was cajoled into writing a book (this book) about him and the Great Danbury State Fair. 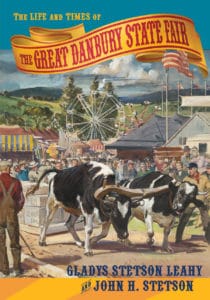