Kent, CT, resident and author, Jim Perkins’ influence is today commonly seen in the blossoming of on-line shopping and the transition of delivering voice and data communications from wire hung on telephone poles to multi-use, wireless, hand-held, digital devices. Yet the most extraordinary story of all is how his commitment to the outdoors and the environment, by luck alone, led him to initiate a land, water and wildlife conservation program that today encompasses more than thirty million acres of public lands in the United States.

Jim has been recognized by the United States Department of Defense and Dartmouth College for his initiation of the US Air Force Conservation Program and on October 9, 2015, he and DoD historian Jean Mansavage, Ph.D. gave a well-attended talk on the program at Dartmouth’s Rockefeller Center, Hanover, NH.

With his wife, Judith, Jim lives in rural Connecticut where he has notably taken on land issues, water issues, Native American issues, and uncategorized environmental issues arising from public indifference and neglect. On climate change, he says, getting your arms around the issue is impossible for an individual. But if each of us tends to our own backyard, as neighbors and concerned citizens collectively we can have a positive effect on our shared environment.

His successes, he says, are satisfying. Jim is an alumnus of Dartmouth College and of the United States Air Force, the two institutions giving definition to his life and to the importance of family.

Jim is an alumnus of Dartmouth College and of the United States Air Force, the two institutions giving definition to his life and to the importance of family. 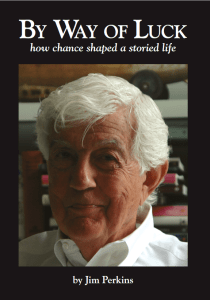