Marc Youngquist enlisted in the Marines in April 1969, and went off to Parris Island on August 18th of that year. For the next four years, he served all over the Western Pacific (with a very limited time and no direct combat experience in Vietnam). In July 1973, Marc was discharged from active-duty as a Sergeant and, in 1975, was honorably discharged from the Marine Corps Reserve.

In 1974, Marc became a police officer attaining the rank of Lieutenant. During that time, he attended the University of New Haven, obtaining a B.A. in Criminal Justice. In 1979, he graduated from the Federal Bureau of Investigations’ National Academy in Quantico, Virginia.

Marc went on to work as a contractor for the Department of Energy and returned to school to earn an M.S. in Criminal Justice/Public Administration. He later enlisted in the Army Reserve as a Drill Sergeant, and two years later transferred to the Military Police in the Connecticut Army National Guard, where he served the rest of his military career.

While an MP, Marc held every position from driver to First Sergeant and was deployed to Panama, the Dominican Republic, 9/11 airport security, and then finally, Iraq.

Since retiring in 2012 as a Special Investigator for the Insurance industry, Marc has been spending his time traveling with his wife and three dogs, and resides in Connecticut where he writes and builds stunning kayaks.

If you want to keep up with what Marc’s doing, feel free to visit his website at marcyoungquist.com. Marc also welcomes hearing from his readers. You can contact him using the form below.

Interested in having Marc come speak to your group or interviewing him for your following? Complete the form below, and he’ll get back to you as soon as possible. 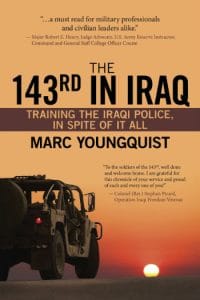