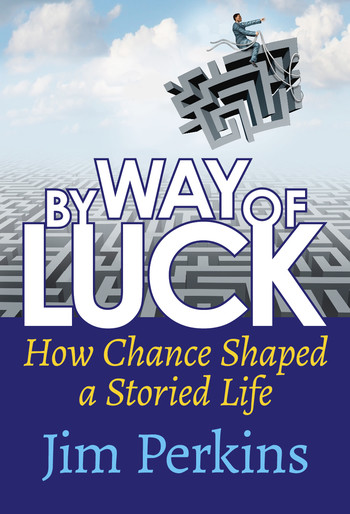 What's luck got to do with it? Everything, says author Jim Perkins.

Follow along as Jim shares his stories of how a son of Greek Macedonian immigrants came to serve in the U.S. Air Force, rub elbows with celebrities and corporate bigwigs, significantly influence the publishing and ecommerce industries, and initiate a program that led to the conservation of more than 30 million acres of public lands in the United States. His stories give a first-hand glimpse into the evolution of business and media in America.

Learn through the wit and wisdom of the author how chance may even be shaping the story of your own life every time you decide to take the path "less traveled by."

Praise for By Way of Luck

"Lucky? No way. Jim Perkins fascinating, delightfully crafted odyssey makes it clear, in fact, that it s his extraordinary imagination, creativity and vision, not to mention his mastery of the language, that can transform a tale of luck into an endlessly surprising and always engaging read." —Joe Mathewson, Journalism Teacher, Northwestern University; author, The Supreme Court and the Press: The Indispensable Conflict

"While Jim Perkins credits his livelihood to good fortune...that isn't the whole story. A reader will learn from the stories he tells that when you re alert to life s possibilities; are willing to take risks; and are resilient when setbacks occur; success happens. An invigorating book." —Jean A. Mansavage, Ph.D., historian, U.S. Air Force Historical Studies Office; author, Natural Defense

"A bravura performance. By Way of Luck far surpasses most of the breed. Perkins is a natural story teller. His voice comes through in both the flow of the narrative and its peopling with characters vividly drawn. For the reader who knows the territory he covers, this is valuable stuff, with a significant lesson imparted: Namely, danger awaits any firm that stubbornly maintains its corporate culture in the face of change." —Donald S. Lamm, retired Chairman, CEO and Editor-in-Chief, W.W. Norton & Company, publishers