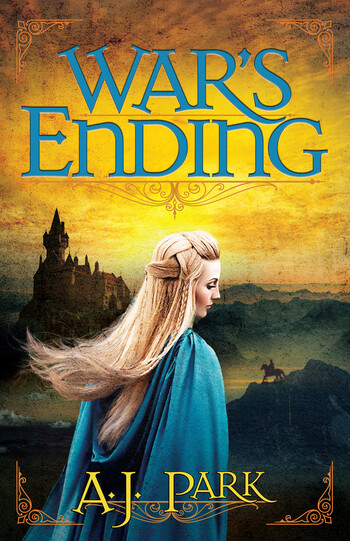 A courageous noblewoman. A mysterious stranger. A war that may destroy them both…

As the king’s niece, Shalyrie can’t wait to explore her kingdom’s colonies with her uncle. But when she’s badly injured in a savage raid and abducted by mysterious masked horsemen, she’s stunned when her captors heal her wounds. As she adjusts her preconceptions, a terrifying attempt on her life reveals that her own people are trying to kill her.

Kalleck expects to die fighting a hopeless war like his father before him. While he helps Shalyrie piece together clues behind the assassination attempt, her very presence escalates tension between the kingdom and the colony. With time running out, Kalleck knows he must act quickly to prevent innocent bloodshed, yet Shalyrie might be the only one who can end the war.

Can two enemies join forces to put an end to a devastating war?

War’s Ending is an enthralling YA fantasy novel. If you like noble heroines, mysterious strangers, and exotic cultures, then you’ll love A.J. Park’s gripping tale.

Buy War’s Ending to ride into a heartfelt adventure today!

Readers' Favorite gave this book a 5-star review, claiming "The wonderful writing, composed of short chapters and well-calculated paragraphs, makes for an enjoyable read, but what will stick with readers more are the rock-solid characters. War's Ending is an enticing read, indeed." (Read the full review here.)