John Suscovich lives and works on a 52-acre farm in Western Connecticut. His main operation has always been pastured broilers, however, through the years he has expanded to pigs, sheep, hops, apples, herbs and vegetables. His farm, Camps Road Farm, is one part of a three-part business that includes Kent Falls Brewing Co., a farm brewery on property, and Neversink Spirits, a craft distillery off property. Since getting into farming, John has raised as few as 40 broilers and as many as 2,400 broilers in one season. No matter what else he ends up growing on his farm, chickens always seem to maintain a special place in his heart. They’re enjoyable to raise, his community loves them, and they’re a vital part of the success of his farm. His life has taken a lot of interesting turns. He grew up in Connecticut and went to college at the University of Connecticut as a technical theater major. After school, he moved to New York City where he worked for … Continue Reading 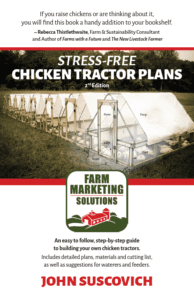